London, UK, 21 January 2021 - Tate & Lyle PLC (Tate & Lyle) is pleased to announce the appointment of Vivid Sehgal to the position of Chief Financial Officer with effect from 1 May 2021. 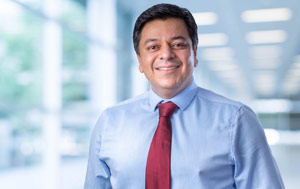 Vivid Sehgal is a former Chief Financial Officer of Delphi Technologies PLC, a global provider of automotive propulsion technologies, having served from 2017 to 2020 when it was acquired by BorgWarner Inc. He also served as Chief Financial Officer of LivaNova PLC, a global medical technology company, from 2015 to 2017 and has previously held senior management positions in Allergan Inc., Gillette Inc., and GlaxoSmithKline PLC working across the US, Europe and the Middle East.

Nick Hampton, Chief Executive said: "I am delighted to welcome Vivid to Tate & Lyle and the executive team. He brings with him a proven track record of financial leadership as well as extensive commercial and transactional experience. I very much look forward to working with him as we continue to progress Tate & Lyle’s growth agenda.”

Gerry Murphy, Chairman said: “Vivid’s broad financial, business and international experience will be of great value to Tate & Lyle and he is a very welcome addition to our Board.”

Vivid Sehgal, 52, was Chief Financial Officer of Delphi Technologies PLC, a global provider of automotive propulsion technologies, from 2017 until it was acquired by BorgWarner Inc. in 2020. Prior to joining Delphi, he served as Chief Financial Officer of LivaNova PLC, a global medical technology company, from 2015 to 2017. Previously, Vivid served as Senior Vice President, Treasury, Risk and Investor Relations at Allergan, Inc. a multi-specialty health care company, from 2014 to 2015. Prior to assuming his position as Senior Vice President, Mr. Sehgal served as Vice President and Regional Controller of Allergan’s Europe, Middle East and Africa business from 2007 to 2014. Before Allergan, Mr. Sehgal worked for nine years in various roles with GlaxoSmithKline PLC and SmithKline Beecham PLC, where he eventually served as Group Controller for GSK’s International Pharmaceutical Division. In his early career, he worked for Gillette Company, Inc. during its acquisition by Procter and Gamble, Inc. and Grand Metropolitan plc. Vivid has a Masters degree in Finance and Investment from the University of Exeter, a Bachelor’s degree in Economics from the University of Leicester and is a member of the Chartered Institute of Management Accountants.

Vivid Sehgal is appointed on an annual salary of £475,000. This will next be reviewed in April 2022. He will be eligible for a bonus under Tate & Lyle’s discretionary bonus scheme. This scheme currently provides for a bonus paid at 75% of salary at target and a maximum opportunity of 150% of salary. Bonus awards are subject to performance conditions and awards in excess of 100% of salary are currently made as shares which are released after 24 months.

Vivid will be eligible to receive a Performance Share Plan (PSP) award of up to 300% (maximum) of base salary which will be subject to a three-year performance period. A two-year post-vesting holding period follows the three-year performance period. No other share awards are due in relation to his appointment. He is required to accumulate a shareholding in Tate & Lyle equivalent to three times base salary within five years of joining the Company.

In accordance with paragraph 9.6.13 of the Financial Conduct Authority’s Listing Rules, the Company confirms that:

i) Vivid Sehgal holds no current directorships and has not held any directorships in the last five years in any publicly quoted companies; and
ii) There are no further disclosures to be made pursuant to paragraph 9.6.13 of the Financial Conduct Authority’s Listing Rules.