How can bitter taste receptors help us to fight lung infections?

Taste receptors play a much broader role than previously assumed, impacting not only our nutritional habits but also immunity and several other physiological pathways, and have been identified as promising candidate targets of public health importance.

"Immunity" has never before received so much attention, particularly prompted by the COVID-19 pandemic and flurry of food and beverage product launches carrying claims around their reported role in boosting the immune system. At the same time, both smell and taste have gained attention in the general discussion, as millions of people who have contracted this virus have also experienced a loss of smell and/or taste. In this scenario, recent evidence is showing how our bitter taste receptors could be unsuspected allies, playing an important role in immunity by silently helping us to fight infections long before the current pandemic arose.

Bitter taste perception is mediated by a family of bitter taste receptors (TAS2Rs)1 that belong to the important G protein-coupled receptors (GPCRs) group, the largest family of membrane proteins that mediate most cellular responses to hormones and neurotransmitters, in addition to being responsible for vision, olfaction and taste2. The activation of such TAS2Rs by a bitter compound such as alkaloids and polyphenols, for example, induces the activation of signalling proteins residing within the cell that, ultimately, transmit an electrical impulse to the brain, which translates it into “bitterness”3. 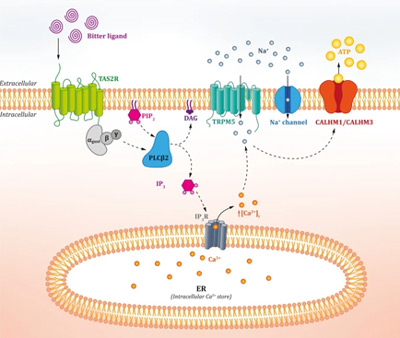 We, humans, have 25 functional TAS2Rs that reside in our taste buds on the tongue, acting as gatekeepers by helping us to avoid eating potentially toxic substances some of which, in high quantities, could be dangerous for the body5. Therefore, by impacting our nutritional habits, they guide our food choices.

One of a kind

Among these 25 TAS2Rs, one of them, namely TAS2R38, has gained some fame as, depending on which genetic mutations are present on the individual’s gene, the resulting receptor discriminates, with a broad range of more subtle differences, between people who are able ( “tasters”), or not (“non-tasters”), to taste the bitter synthetic chemicals phenylthiocarbamide (PTC) and 6-n-propylthiouracil (PROP), and other structurally similar compounds. These compounds include those present in cruciferous vegetables such as broccoli, brussels sprouts, and collard greens, for instance6. TAS2R38 is only one of the 25 TAS2Rs and therefore bitter taste perception cannot be solely reduced to this receptor; however, its importance is still very relevant as PTC and PROP perception are used as a proxy of general taste ability, and the ability to taste them, or not, has been correlated with vegetable bitterness and intake, alcohol consumption and smoking habits, among others7,8. 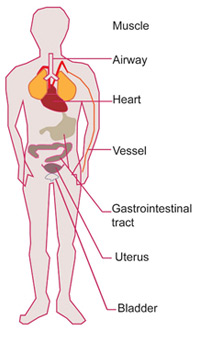 Not where you were expecting them

Canonically, it has been assumed that bitter taste receptors are located solely in the oral area, but recent discoveries have instead shown how they are also present in extra-oral locations, including the digestive, respiratory, and genitourinary systems, where they carry out different biological functions.

For example, in the gastrointestinal tract (GI), bitter taste receptors act as a second line of defence. Indeed, when activated by bitter compounds, they generate responses ranging from absorption to metabolisation of nutrients, release of satiety hormones, modulation of glucose transport, gastric emptying, and gut motility regulation1. In the heart, they might help with cardiac contractility and overall vascular tone10. And in testis and sperm, it is hypothesised that they might be involved in male gametogenesis and fertility11.

Contrary to what it was originally thought, bacteria possess sophisticated systems of communication that allow them to send and receive chemical messages by counting their own numbers by producing and detecting the accumulation of signalling molecules that they release into their environment, through a mechanism called quorum sensing12. Perhaps surprisingly, some of these quorum sensing molecules produced by pathogenic bacteria activate bitter taste receptors, including TAS2R38, which precipitate a series of downstream responses that ultimately stimulate the release of nitric oxide (NO), which has biocidal activity13, therefore helping us to address potential infections. This is of particular importance considering that bitter taste receptors are also abundantly expressed in the lungs and in the upper respiratory tract1: indeed, by responding to respiratory infections, TAS2Rs stimulate mucociliary clearance and direct antibacterial effects. Interestingly, it has also been found that “tasters” and “non-tasters” individuals possess differences in the ability to respond to these infections, with the latter being less efficient. Because of this, TAS2Rs, and in particular TAS2R38, have been recognised as airway sentinels in innate defense14.

A potential role in protecting from COVID-19?

In light of these findings, some researchers have raised the possibility that bitter taste receptors could represent therapeutic targets for the clinical symptoms of several viruses including the Severe Acute Respiratory Syndrome Coronavirus Strain 2 (SARS-CoV-2), which causes the Coronavirus Disease (COVID-19)15. Indeed, some retrospective studies have investigated the correlation between TAS2R38 “tasters” and “non-tasters”, finding how the latter are significantly more likely to test positive for SARS-CoV-2, to be hospitalised once infected, and to be symptomatic for a longer duration, suggesting enhanced innate immune protection against SARS-CoV-2 for “tasters”16,17. However, a very recent study18 has further investigated, also from a genetic point of view, the hypothesis that the “non-taster” status might represent a risk factor for the SARS-CoV-2 infection without replicating the previous findings, calling for caution when proposing a COVID-19 treatment based on bitter-taste receptor tasting status.

Davide Risso, MSc, PhD, is Senior Research Scientist in the Global Nutrition team at Tate & Lyle, where he is responsible for broadening the scientific knowledge and understanding of the role of sweeteners in health. His expertise also encompasses bitter and sweet taste receptors (both oral and extra-oral) and their physiological role in humans.