A guide to the 'biotics - pre, pro, syn and post

You may have heard a lot recently about the ‘gut microbiota’ and wondered what it is. Your gut, particularly the lower gut, contains many trillions of micro-organisms (mostly bacteria but also others like fungi and viruses). In fact, it is one of the most densely inhabited microbial eco-systems on earth! 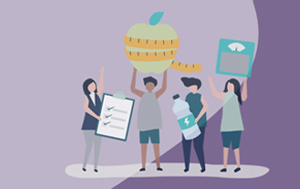 These micro-organisms help protect the gut barrier and support the immune system to fight ‘bad’ bacteria. They generate energy from undigested food, make certain vitamins and influence the motility and function of the gut. The gut microbiota changes and becomes less diverse as we age and can also be affected by a poor diet and antibiotics. Over the last 20 to 30 years there has been much research in this area and its role in gut health.

What is a Probiotic?

Probiotics are live micro-organisms, including bacteria, which have a beneficial effect on health when they are consumed in adequate amounts.

Did you know? Each person’s microbiota is unique like a fingerprint. No two people have the same microbiota because it’s a product of many factors including your diet, environment, mode of delivery at birth, genetic make up and health status to name a few!

How do Probiotics work?

As probiotics pass through your gut, they help discourage the growth of bad bacteria and support the growth of good bacteria already there. They can interact directly with both immune and gut cells, helping to strengthen the gut barrier. The gut barrier plays an important role in allowing nutrients and water pass into the body while keeping toxins and bacteria out . So keeping it working properly is a priority.

Taking antibiotics can deplete the micro-organisms in your gut, and probiotics can help replenish them. Probiotics should be taken as soon as you start the antibiotics and for at least a week after the end of the course. In general, you need to keep taking probiotics to maintain the beneficial effect.

When it comes to probiotics, it pays to be specific if you are interested in a specific health benefit. Probiotics are known by their genus (e.g. Lactobacillus), species (e.g. Acidophilus) and strain (e.g. MN5) and different strains provide different benefits. For example, a specific strain of Lactobacillus rhamnosus GG has been suggested to reduce the length of antibiotic-associated diarrhea. Other combinations of probiotics strains have been suggested to address some of the symptoms of Irritable Bowel Syndrome.

The amount is also important, which is why some fermented foods, although containing live bacteria, may not contain sufficient amounts. Its best to speak to your physician or dietitian about which strain may be useful for a particular condition.

Where are they found?

Probiotics can also be found in foods like live yoghurts and dairy-based drinks containing live cultures, some fermented foods as well as in probiotic food supplements. If a food provides probiotics it will generally communicate the strain and number of bacteria to the consumer on the label. Not all fermented foods contain micro-organisms with proven probiotic effects or in the correct amounts so in many ways not all fermented foods are probiotics and you need to do your research to understand if they meet the criteria for being a probiotics.

Probiotics are generally safe for healthy individuals but those with immune systems that are not working properly or those with serious gut disorders or medical conditions are best consulting their physician before taking them.

Prebiotics on the other hand are not bacteria but a food that the good bacteria in your gut like! They are most often specific types of fibre which pass undigested to the lower gut, where they stimulate the growth or activity of ‘good’ or beneficial bacteria such as Lactobacillus and Bifidobacteria. Like probiotics, a prebiotic, by definition, must also confer a health benefits.

How do they work?

The beneficial bacteria metabolise or ferment prebiotics which encourages their growth but also results in the production of substances called short-chain fatty acids. These compounds can promote a healthy gut, but their benefits may reach beyond the gut to areas like the blood glucose metabolism and the brain.

Other health benefits of certain prebiotics include:

Where are they found?

Dietary sources of prebiotics include leeks, bananas, onions, garlic, tomatoes, chicory and asparagus, but levels can be low. Prebiotics can also be found in foods supplemented with prebiotics. Prebiotics called human milk oligosaccharides (HMOs) are also found naturally in breast milk and encourage the growth of beneficial bacteria in the infant gut and discourage pathogenic or bad bacteria.

Are all fibres considered prebiotics?

While most prebiotics are type of soluble fibres, not all fibres are prebiotics. Remember the key criteria for a prebiotic is that it can be used by the good gut bacteria and proven to confer a health benefit. Some types of fibre like insoluble fibres (cellulose and hemicelluloses often found in bran, wholegrain cereals and vegetable) are important for gut health because they help keep waste moving along the gut but are not really used by bacteria and therefore not considered prebiotics. Soluble fibres like for example soluble corn fibre, inulin, fructo-oligosaccharides (FOS) and galacto-oligosaccharides (GOS) are used by bacteria in the gut with resulting beneficial effects.

While different fibres provide different benefits, scientists agree that increasing overall fibre in the diet from many sources is good for us.

Synbiotics & Postbiotics - the new kids on the ‘biotic’ block?

Synbiotics refers to a mixture of probiotic(s) and prebiotics(s), with each working either independently to achieve one or more health benefits or working together to confer a health benefit which may not been seen when given alone.

Postbiotics refers to preparations of deliberately inactivated microorganisms or their parts (e.g. cell wall) or metabolites that confer a health benefit.

Towards a healthy gut

So, while acting in different ways, probiotics and prebiotics or a combination can help benefit overall gut health by influencing the gut microbiota. Other ways to keep your gut microbiota healthy include eating a varied balanced diet including plenty of fruit and vegetables, maintaining a healthy weight, exercising and only taking antibiotics when you need them.

What is the difference between soluble and insoluble fibre and do you need both?

Dietary fibre is a term used to describe carbohydrates that are not digested in the small gut but pass to the large intestine, where they can either be fully or partly fermented (broken down by bacteria). Fibres can broadly be divided into soluble and insoluble fibre.

Insoluble fibre is largely unfermented (not broken down in the large bowel) so it remains intact and can absorb water and provide bulk to help keep things moving through the gut. Examples of insoluble fibres includes cellulose and hemicelluloses often found in bran, wholegrain cereals and vegetables.

The term ‘soluble fibre’ covers a wide range of different fibres. Some fibres like the pectin found in fruits like apple, citrus fruits and strawberries or the beta-glucan found in oats and barley can become viscous and help to maintain cholesterol or blood glucose levels when consumed in certain doses. Soluble fibres are also found in foods like legumes and vegetables and are fermented in the large bowel where they can act as a source of food for the bacteria already present in our gut. Science is still exploring the effect of this on many aspects of our overall health, but the good news is that most fibre rich foods will contain a combination of soluble and insoluble fibres.

While different fibres provide different benefits, scientists agree that increasing overall fibre in the diet from many sources is good for us.

COMMISSION IMPLEMENTING REGULATION (EU) 2016/854 of 30 May 2016 authorising certain health claims made on foods, other than those referring to the reduction of disease risk and to children's development and health and amending Regulation (EU) No 432/2012. OJ L 142/5

Previous article Diets and the human gut
View all company news
Next article How can bitter taste receptors help us to fight lung infections?