Defining prebiotics: where do we stand now?

Prebiotics are food components that feed and foster the growth of beneficial bacteria that live in your gut, enhancing gut health and thus whole-body health. This is backed by a growing amount of scientific research. What many people don’t know is the journey these substances took to get where they are now. 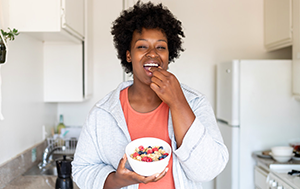 More than 20 years ago, a group of substances were first called prebiotics. They could resist digestion as they travelled through the gastrointestinal tract to reach the colon where they were fermented by specific microorganisms, stimulating the host’s health and well-being. At the time, back in 1995, Gibson and Roberfroid – the first to define prebiotics, wrote that these were non-digestible food ingredients that beneficially affect the host by selectively stimulating the growth and/or activity of one or a limited number of bacterial species already resident in the colon and thus attempt to improve host health. Only a few types of fibre could be classified as such, as only they had been shown to increase the numbers of lactobacilli and bifidobacteria in the gut.

As the knowledge of prebiotics evolved, in 2008 the Food and Agricultural Organization of the United Nations (FAO/UN) proposed a new definition: “nonviable food components that confer a health benefit on the host which is associated with modulation of the microbiota”. Several research groups believed this definition also had its limitations. Definitions evolved and in 2015 a prebiotic was characterised as “a non-digestible compound that, through its metabolisation by microorganisms in the gut, modulates composition and/or activity of the gut microbiota, thus conferring a beneficial physiological effect on the host.”

As the need for a single, consensual definition of prebiotics became evident, the International Scientific Association for Probiotics and Prebiotics (ISAPP) brought together a panel of experts who proposed, based on the latest scientific evidence, the following definition of prebiotics that has been used since 2017: “a substrate that is selectively utilised by host microorganisms conferring a health benefit”.

This definition covers ingredients that are not carbohydrate-based (such as polyphenols and polyunsaturated fatty acids) and different parts of the body (not just the gut, encompassing topical use on the skin, for example). Also, it recognises the advances in microbiome research and the composition of the microbiota that comprises a wide range of species.

This was a big step for prebiotics! Besides traditional benefits for gut health, other potential benefits may then be added, including bone health (by improving the bioavailability of minerals from the diet), immune health (through pathogens inhibition and stimuli of the GALT, Gut-Associated Lymphoid Tissue), cardiometabolic health (impact on blood lipids and insulin resistance), mental health (via metabolites that influence brain function and cognition), among others. Research to confirm many of these potential benefits is ongoing.

To be considered a prebiotic as per the new definition, a substance must prove safety in the levels of use and demonstrate efficacy, i.e., trigger selective effects on the microbiota plus providing a benefit to the host’s health, preferably shown through clinical trials conducted in a population representative of the target group.

If defining prebiotics wasn’t an easy task, proving that a component is a prebiotic is even more challenging! Nevertheless, it is worth it. Although there aren’t many ingredients that have been able to demonstrate prebiotic effects under the new definition, approved prebiotics are now backed by robust scientific evidence and can be considered the most well-studied and recognised substances to date in the category.

Tate & Lyle’s PROMITOR® Soluble Fibre has been tested by several independent researchers to validate its effectiveness and demonstrate physiological health benefits which conferred PROMITOR® the status of a prebiotic. PROMITOR® prebiotic properties may support a healthy gut by stimulating the growth/activity of specific bacteria and producing short-chain fatty acids and help support bone health by increasing calcium absorption and bone calcium retention.

Previous article Does eating more sustainably equal bland and boring?
View all company news
Next article Diabetes in Asia: Are we at higher risk?