Last month, Tate & Lyle launched its Gut Health Campaign, with the publication of its health and nutritional data modelling, exploring the positive difference fibre reformulation could make to people’s health in the UK. The findings revealed that increased fibre fortification of some everyday UK foods could enable 50% more UK adults to get the recommended daily amount of fibre in their diets. 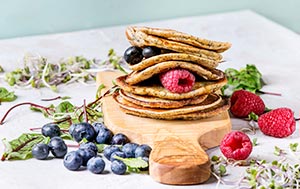 This month is National Nutrition Month – created by the Academy of Nutrition and Dietetics – encouraging everyone to learn about making informed food choices and developing healthful eating habits. Increasing our fibre intake can play a vital role in helping consumers to achieve this.

The World Health Organization recommends that adults eat at least 25g of fibre per day – but the reality is that most people are not getting enough, and in many cases nowhere near enough.

The benefits of increasing populations and individuals’ fibre intake on non-communicable disease risk have been known and promoted for decades around the world. Public health campaigns, including dietary recommendations, called for populations to increase their consumption of whole grains, fruits and vegetables, while manufacturers increased the fibre content of certain products. Despite this, most people continue to not get enough fibre in their diet.

There continues to be a wealth of research looking at how the population’s relationship with fibre has changed, and how food and drink manufacturers have tried to adapt. One such piece of research was recently published in the European Journal of Clinical Nutrition and uncovered some interesting findings.

The study looked at the changes in total fibre intake in the UK population in between 2008-2009 and again in 2016-2017. The research also calculated the contribution to fibre intake from each food group. It found:

Fibre does so much more than simply promote healthy bowel function. Getting the right amount of fibre in your diet is highly beneficial for wider health and wellbeing, including cardiovascular, immunity, skin, brain and gut health. Emerging research also indicates that some fibres can also help the immune system function properly. Low fibre intake is associated with higher levels of colorectal and breast cancer, cardiovascular disease, and type 2 diabetes, and can disrupt the beneficial gut microbiota.

If research shows that despite various health campaigns, consumers still struggle to increase their fibre intake and manufacturers only increase fibre in certain food categories, perhaps it is time to change tactic and up the ante?

By fortifying more food and drinks with fibre, manufacturers could help consumers achieve the recommended intake and enjoy the various health benefits that brings. Tate & Lyle works closely with customers to help them do this, without compromising on taste.